The  Bridges of Eddington.
​ Eddington is surrounded by rivers and creeks, so there are quite a few interesting bridges in the area. 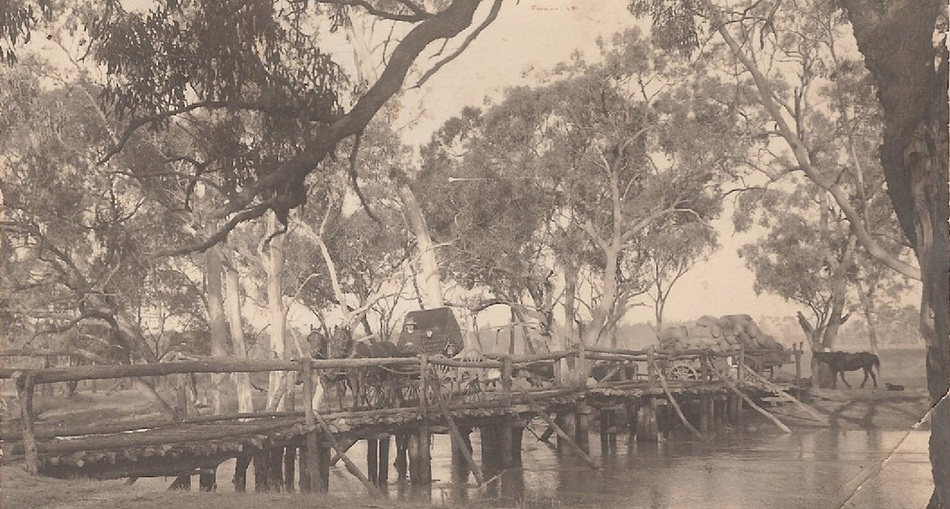 Photograph courtesy of Anne Doran
This  is a local Eddington bridge circa 1855.  Here is Uncle Charlie leading the way across the bridge before cousin Bill brings the  bullocks hauling the wheat crop  to the flour mill, with the pack horse and dog following.

This was the main Eddington bridge across the Loddon  on the Dunolly-Maldon road, at the bottom of McCoy Street.  All that remains  today are some posts that can be  seen  only when the river is very low.
A bullock team assists  with rebuilding after a flood, while Uncle Charlie has lunch with his 2 dogs!!
Photos courtesy the Goulden family.

The  Eddington bridge after rebuild. Uncle Charlie tries it out. 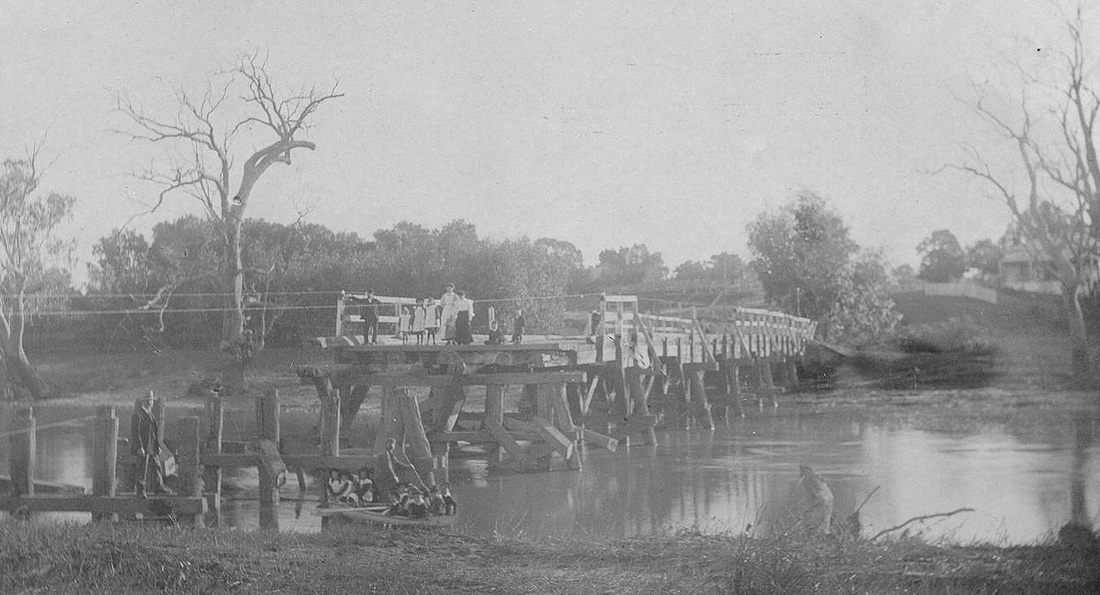 Uncle Charlie's house can be seen on the other side of the river. 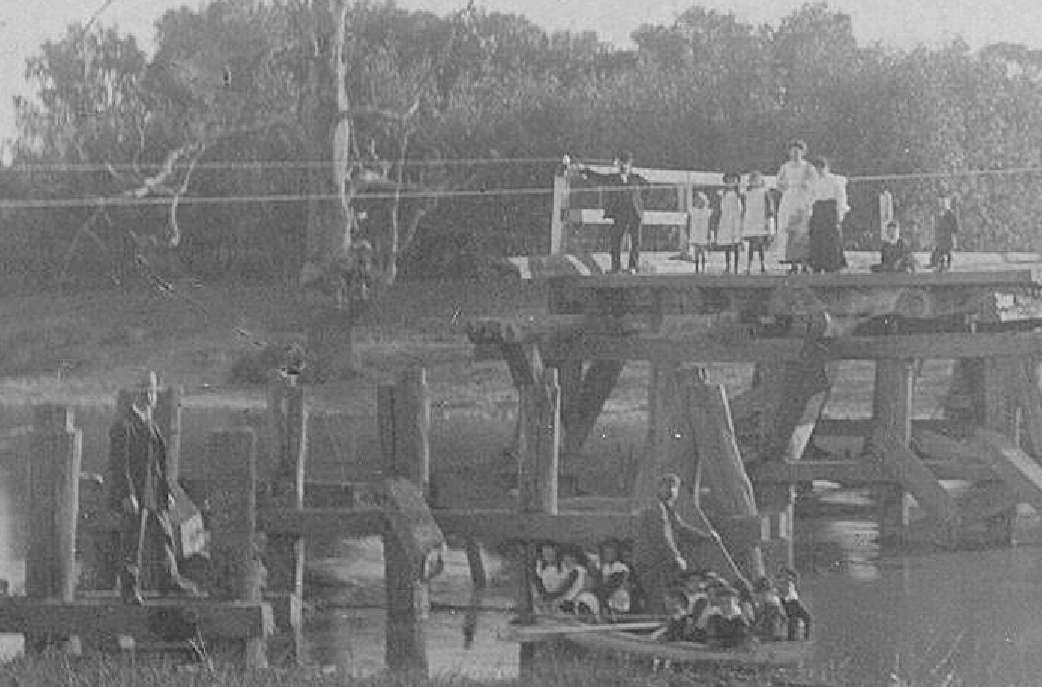 After a flood has washed away part of the bridge, Uncle Charlie takes the children by boat, boys on one side, girls on the other, across the river to school, while others wait their turn, hoping their little white pinnies stay clean!

This bridge was built in 1929 on the Bendigo-to-Maryborough road to replace the one at the end of McCoy street, which was constantly being flood-damaged.
The workers lived in a camp near the bridge during the build and swelled the numbers of the Eddington football club, which won its first Loddon Valley Premiership in 1927.
It was the longest concrete bridge in Victoria at the time. 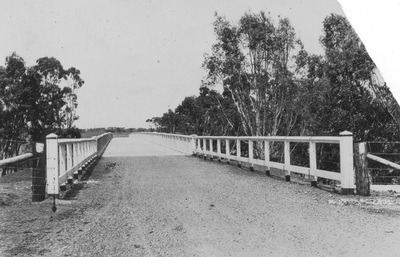 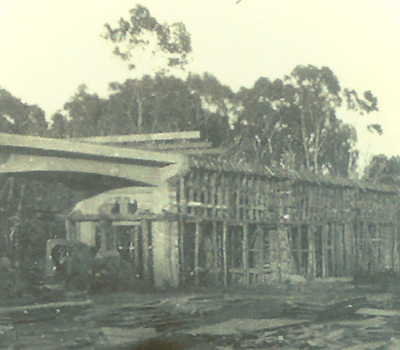 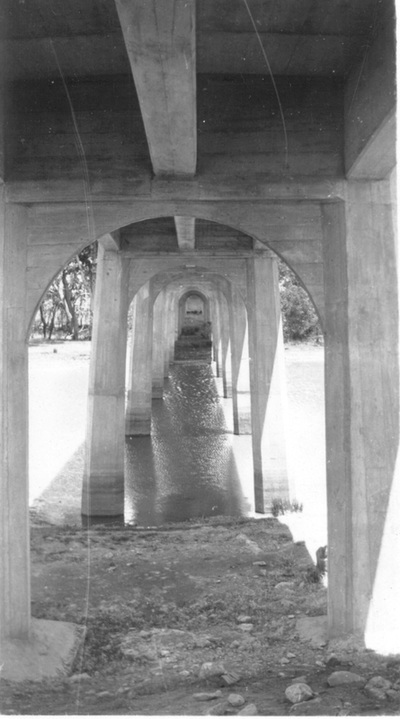 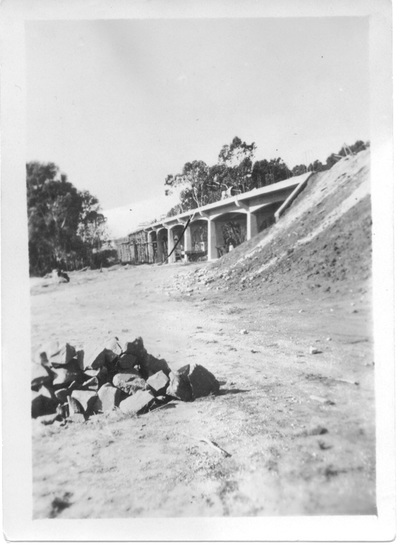 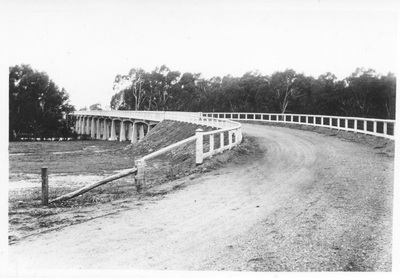 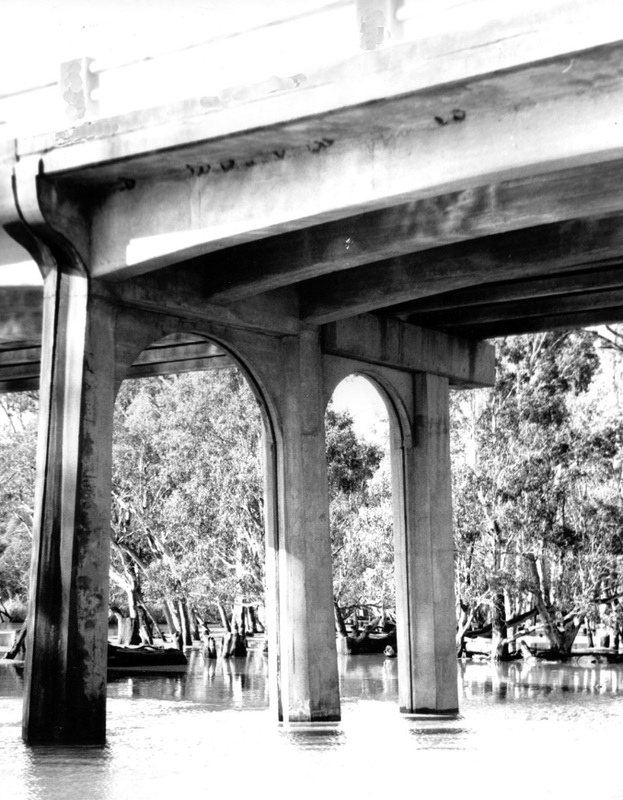 Another arch was added in 1970, taking the bridge from 18  to 28 feet wide.
It was at this time that the position of the road was also altered.  Originally, the road  from Maryborough  went straight down to Playfair street, through what is now paddocks, level with the entrance to Hogan's bridge.  It then turned right  into Playfair street, then a left hand turn onto  the bridge.
The construction of the extra width took over 4 months to complete, while traffic was detoured  down Forbes road and over the Three Bridges. 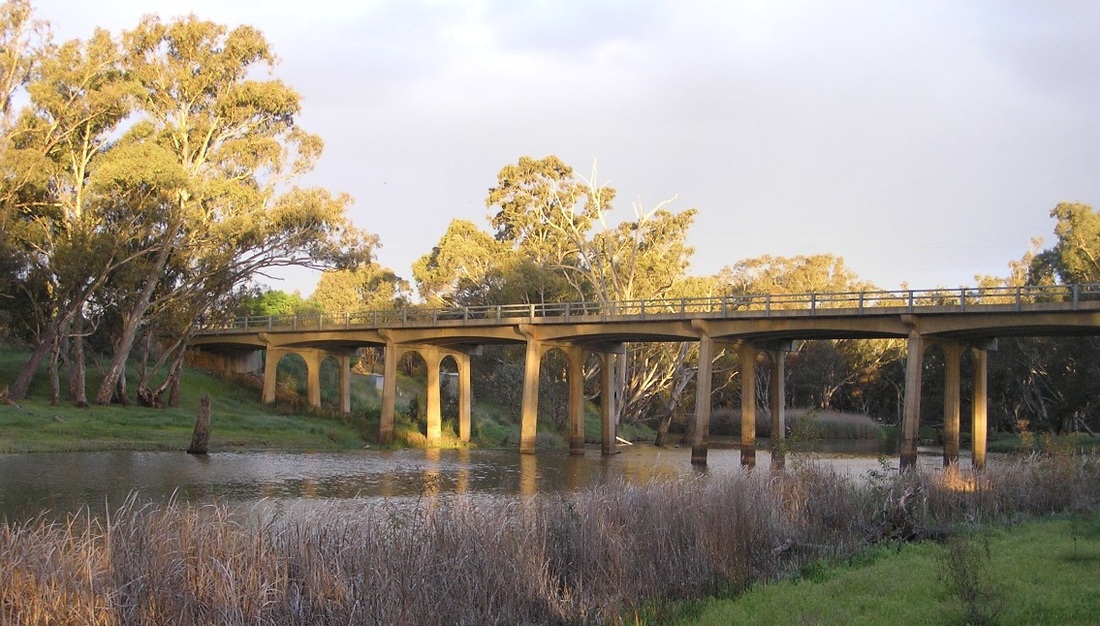 The Eddington bridge today, with the river at its normal height.
When you see the photos of the 2011 flood, (in "around Eddington") you will see how  the river came almost to the top of the arches.

This bridge was widened again in 2000, and a new concrete deck put down.  They used traffic lights, which in 2000  was quite a novelty in Eddington.
​None of Uncle Charlie's bullocks needed here! 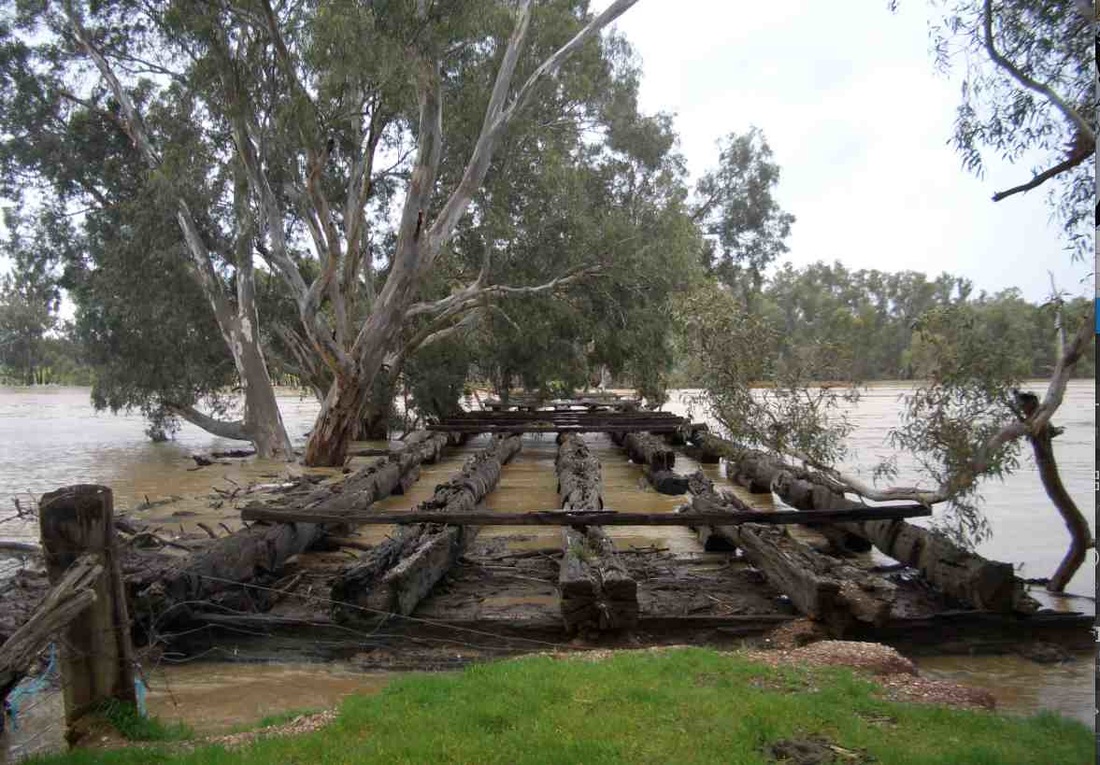 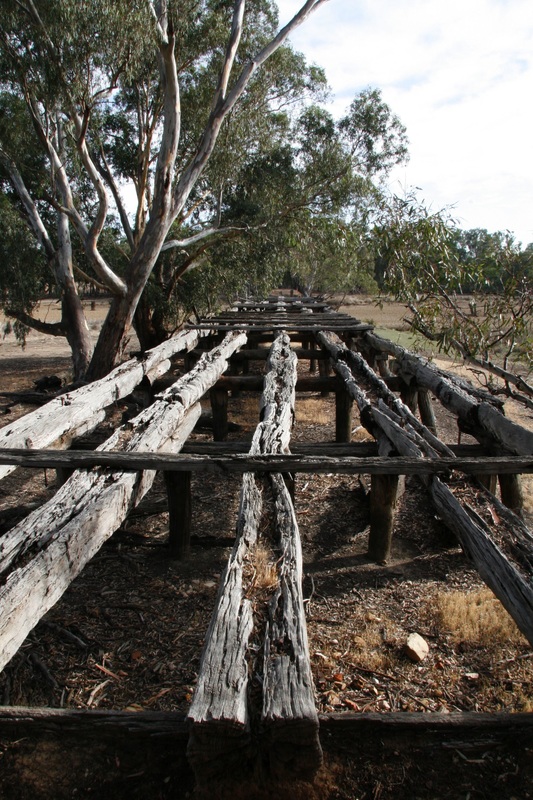 This is what is known as Hogan's bridge, which is at the  north end of the town, off the Dunolly Road.  The top photo was taken  during a flood in the late 70s when the bridge was still crossable  on foot (just).
​ 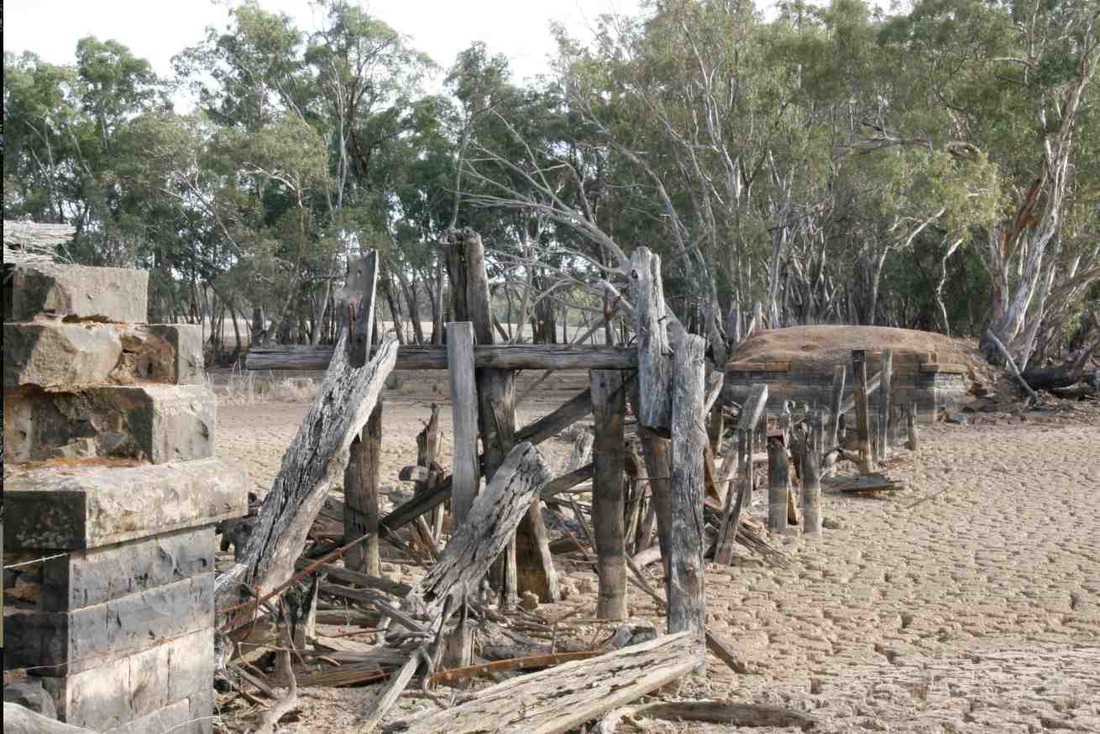 This  is what is left of Hogans bridge, taken during a recent drought. 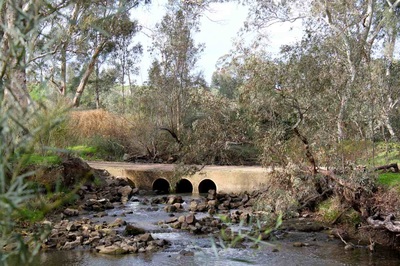 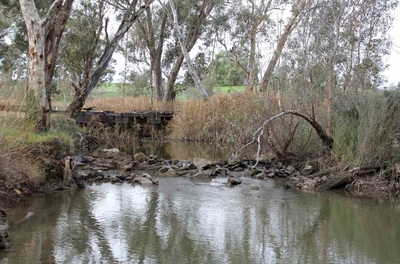 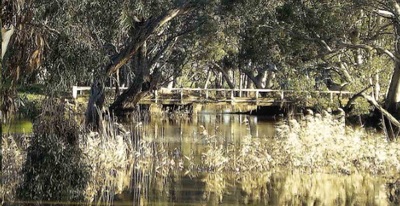 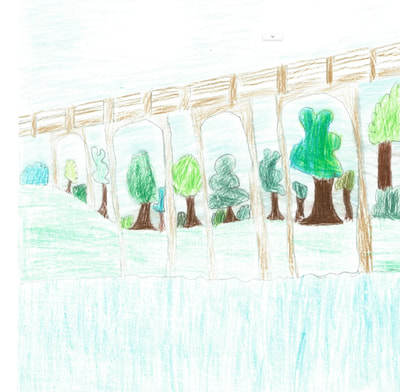